The EXE/Script Advanced sensor runs an executable file (.exe, .dll) or a script (batch file, VBScript, PowerShell) on the probe system. This option is provided as part of the PRTG API. The return value of this sensor must be valid Extensible Markup Language (XML) or JavaScript Object Notation (JSON). 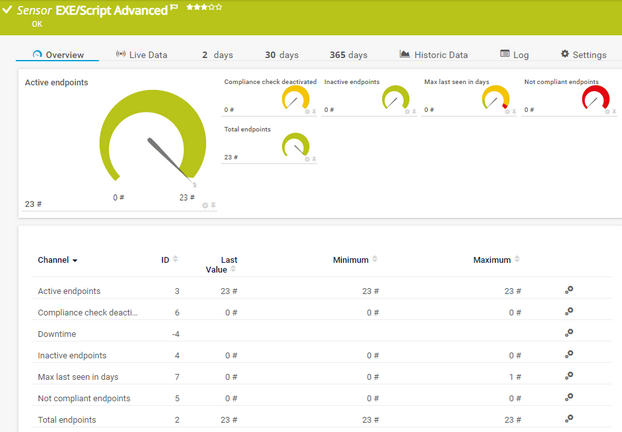 You cannot add this sensor to the hosted probe of a PRTG hosted by Paessler instance. If you want to use this sensor, add it to a remote probe device.

The following settings in the Add Sensor dialog differ in comparison to the sensor's Settings tab.

Click the Settings tab of a sensor to change its settings.

Usually, a sensor connects to the IP Address or DNS Name of the parent device on which you created the sensor. See the device settings for details. For some sensors, you can explicitly define the monitoring target in the sensor settings. See below for details on available settings.

By default, all of the following settings are inherited from objects that are higher in the hierarchy. You should change them centrally in the root group settings if necessary. To change a setting for this object only, disable the inheritance by clicking the button next to inherit from under the corresponding setting name. You then see the options described below.

You cannot interrupt the inheritance for schedules, dependencies, and maintenance windows. The corresponding settings from the parent objects are always active. However, you can define additional settings here. They are active at the same time as the parent objects' settings.

You need to escape special characters in parameters that you pass to an executable or script and surround them with quotation marks to make sure that the characters are correctly interpreted. PowerShell scripts in particular require adequate escaping so that the parameters are passed in a valid PowerShell syntax. PRTG automatically does most of the escaping for you.

Follow these rules to escape special characters and whitespaces in the parameters fields:

We recommend that you do not pass passwords in parameters. Use PRTG placeholders instead. See section Custom Sensors for details.

What is the Mutex Name in the EXE/Script Sensor settings?

How and where does PRTG store its data?

How can I test if parameters are correctly transmitted to my script when using an EXE/Script sensor?

For which sensor types do you recommend Windows Server 2012 R2 or later and why?

How can I show special characters with EXE/Script sensors?

Why do I have to store SQL sensor queries and custom scripts in files on the probe computer?

For more information about sensor settings, see the following sections: