Upon installation, PRTG automatically creates the first probe, namely the local probe in PRTG Network Monitor, and the hosted probe in PRTG Hosted Monitor. They run on the PRTG core server system and monitor all reachable devices, servers, and services from the system, using the sensors you configure.

There are several situations that make it necessary to work with remote probes in the same LAN or in remote locations. Among these situations are the following:

▪You use PRTG Hosted Monitor and want to monitor your local network.

▪You have more than one location and you need to make sure that services are available from all locations.

▪Your network is divided into several LANs that are separated by firewalls, and the local probe cannot monitor specific services across these firewalls.

▪You want to monitor systems in a secure network and you need a secure connection between the PRTG core server and that network.

▪You want to sniff packets on a different computer.

▪You want to monitor NetFlow data on a different computer.

▪You experience performance issues with CPU-intensive sensors like Packet Sniffer or NetFlow sensors and need to distribute the load among more than one computer.

The following chart shows an example for a remote probe scenario. 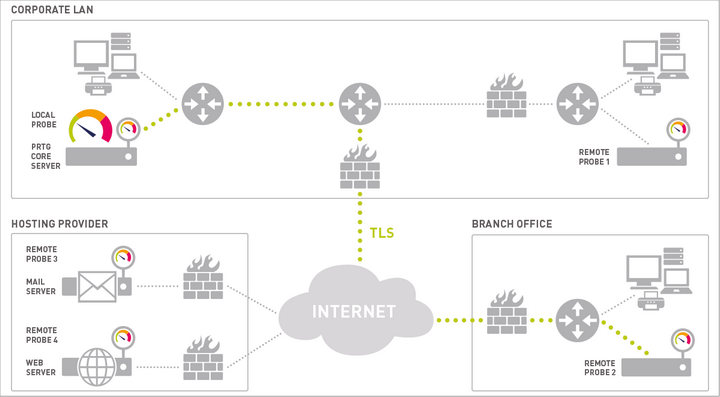 Monitoring a Distributed Network with PRTG

The PRTG core server inside the corporate LAN (top left) can monitor:

▪Services that are inside the corporate LAN using the local probe.

▪Services that are behind a firewall in the corporate LAN using remote probe 1.

▪Secured services that are inside the branch office (bottom right) using remote probe 2.

▪Public services on the internet using any of the probes.

If the connections between the PRTG core server and a probe fail for any reason (for example, restarting the PRTG core server system), the probe continues to monitor and stores the results. During a connection loss, a buffer stores a maximum of 500,000 sensor results in the RAM of the remote probe system (up to 50 - 200 MB). This means that for 100 sensors with a 1-minute scanning interval, the probe can buffer the monitoring results of up to 3 days (or 52 minutes for 10,000 sensors with a 1-minute scanning interval). The probe automatically reconnects to the PRTG core server as soon as it is available again and transmits all monitoring results that it gathered during the connection loss.

As a security precaution, you must manually approve the probe in the device tree before you can create any sensors. You can also deny a probe. PRTG then disconnects it. PRTG accepts no further connection attempts and it adds the probe IP address to the Deny IP Addresses list in the probe's system settings. This ensures that unauthorized probes cannot connect to a PRTG core server.

Because the probe initiates the connection, you must ensure that a connection to your PRTG core server from the outside can be established. The process is the same as if you wanted to allow access to the PRTG web server provided by the PRTG core server via port 80 or 443. In most cases, this means that you will require an allow or allow-nat network address translation (NAT) rule that enables the probe to reach the PRTG core server via the Transmission Control Protocol (TCP) port 23560. Then, the probe uses a dynamic port from the high port range (49152 - 65535) for outgoing connections.

If you run PRTG in a cluster, remote probes also connect to all cluster nodes and send monitoring data. This works as described above for a single PRTG core server. If the master node fails, you can still see monitoring data on the failover nodes. You can define the Cluster Connectivity of each probe in the probe's settings, section Administrative Probe Settings.

PRTG updates the local probe when you update the PRTG core server. All remote probes automatically download the new binaries via the SSL/TLS-secured probe connection or PRTG core server connection. Downloading the 4-MB file takes anywhere from a few seconds (in LANs) up to a few minutes (via internet connections), depending on the available bandwidth. As soon as the update is downloaded, the remote probe disconnects, installs the update, and reconnects to the PRTG core server. This takes between 20 and 100 seconds. Note that during the update phase, monitoring by the local probe can be affected because of the bandwidth that is required for the downloads.

If a remote probe keeps disconnecting after an update, check if the server with the remote probe has two network connections with different IP addresses. Make sure that these addresses are in the list of allowed IP addresses in the Core & Probes settings.

How to connect PRTG through a firewall in 4 steps