The Windows Network Card sensor monitors bandwidth usage and traffic of a network interface via Windows Management Instrumentation (WMI) or Windows performance counters, as configured in the Windows Compatibility Options of the parent device.

Which channels the sensor actually shows might depend on the monitored device and the sensor setup. 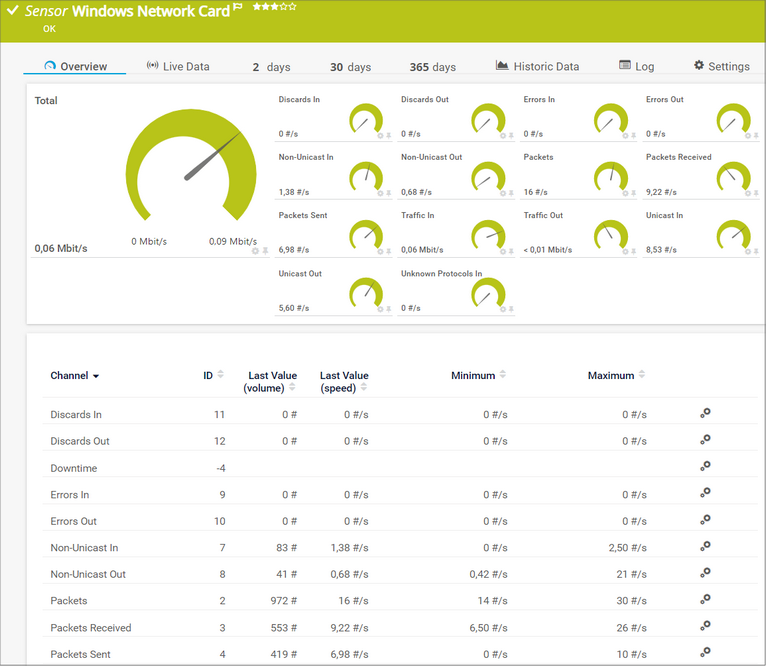 You cannot add this sensor to the hosted probe of a PRTG hosted by Paessler instance. If you want to use this sensor, add it to a remote probe device.

Sensors using the WMI protocol have a high impact on the system performance. Try to stay below 200 WMI sensors per probe. Above this number, consider using multiple remote probes for load balancing.

For a general introduction to the technology behind WMI, see section Monitoring via WMI.

Select the network interfaces that you want to monitor. PRTG creates one sensor for each interface that you select in the Add Sensor dialog. The settings you select are valid for all sensors that you create when you finish this dialog.

The following settings in the Add Sensor dialog differ in comparison to the sensor's Settings tab.

Click the Settings tab of a sensor to change its settings.

Usually, a sensor connects to the IP Address or DNS Name of the parent device on which you created the sensor. See the device settings for details. For some sensors, you can explicitly define the monitoring target in the sensor settings. See below for details on available settings.

By default, all of the following settings are inherited from objects that are higher in the hierarchy. You should change them centrally in the root group settings if necessary. To change a setting for this object only, click

under the corresponding setting name to disable the inheritance. You then see the options described below.

You cannot interrupt the inheritance for schedules, dependencies, and maintenance windows. The corresponding settings from the parent objects are always active. However, you can define additional schedules, dependencies, and maintenance windows. They are active at the same time as the parent objects' settings.

My Windows sensors do not work when using direct Performance Counter access. What can I do?

For more information about sensor settings, see the following sections: