Looking to optimize the performance of your servers?

What is responsible for a drop in server performance? PRTG helps you answer this crucial question. Server monitoring software provides for a comprehensive overview, thereby allowing you to identify performance issues. When it comes to poor performance, the problem often lies in the details. Some of the performance indicators which you’ll need to keep a close eye on are network connectivity, CPU, RAM, and the hard drive.

When companies grow and more and more employees are accessing more and more applications on your servers, the processors of these servers can quickly become maxed out. A constant increase in the number of queries (and the side effects which arise because of them) leads to a drop in CPU performance and a slowdown in the reaction times of programs.

With PRTG, you will recognize this bottleneck at once. Use the SNMP CPU Load Sensor and Windows CPU Load Sensor to get early warnings and an overview of your server’s CPU.

PRTG lets you intervene before your server’s CPU really becomes overloaded and your colleagues are unable to continue working.

As the number of programs and background tasks running on a server increases, so does the amount of data that is written to the memory. If the RAM runs while full, it can be responsible for any number of serious performance bottlenecks. Once the RAM is full, Windows begins to write data to the pagefile, while in Linux, “swap space” is used. Generally speaking, modern computers and servers should not have to use this kind of virtual memory, for they are usually equipped with enough RAM to begin with. If pagefile or swap space is used on a permanent basis, then something may be wrong with your memory.

PRTG lets you monitor both of these system files so you can immediately determine if your server is strained. To do so, use our Windows Pagefile Sensor and SNMP Linux Meminfo Sensor. In addition, think of deploying suitable sensors to monitor your memory directly so you can take prompt action against looming system overloads and their accompanying dips in performance.

A bottleneck affecting the read and write speed of storage devices (such as a hard drive) is one of the most common causes for drops in server performance. High input/output (I/O) levels will slow down your server and its applications considerably, as the CPU must always wait for the drive to respond first.

PRTG will monitor the read and write speed (I/O) of your drive, as well as the amount of free hard disk space, so you never run the risk of operating with a full drive. Some of the Windows sensors which come in handy for this are the Windows Physical Disk I/O and WMI Free Disk Space (Multi Disk) sensors, and for Unix-based systems, the SNMP Linux Physical Disk Sensor and SSH Disk Free Sensor.

Special pre-configured sensors for monitoring hard drives are also available for the storage systems of manufacturers such as NetApp, HP, IBM, Buffalo, Dell, and Lenovo EMC.

If you use virtual machines, then performance issues are usually found on the host server. PRTG uses a variety of sensors to monitor host server hardware, such as the VMware Host Performance (SOAP) Sensor, which reads all the important performance indicators of VMware servers, including the load values of the CPU, hard drives, RAM, and network connections. There are even predefined sensors for other virtualization software providers like Hyper-V and Citrix XenServer.

PRTG lets you keep a constant eye on your SQL servers. Sensors are available for Microsoft, Oracle, MySQL, and PostgreSQL, among others. These sensors allow you to reduce downtime and optimize the performance of your databases and database queries.

Bluescreen? This short video explains why server monitoring is important

Keep an eye on hardware

PRTG provides a constant overview of all your hardware and can be used with a number of different manufacturers. If a certain value is exceeded, you'll be notified at once – and usually before things get serious. This will save you both time and stress in your day-to-day work.

PRTG monitoring lets you spot bottlenecks quickly, often before problems arise. This means you can take quick, proactive action to keep your server up and running – and even improve it.

PRTG provides you with historical data over an extended period of time. This data allows you to see if and to what extent your network becomes strained. Custom reports and automatically generated charts help with reporting.

Along with the monitoring of local networks, PRTG is especially suited for distributed ones. The remote probes of PRTG monitor servers in different locations from one centralized position. This reduces the need for travel.

PRTG lets you monitor all of your servers’ performance classes. Whether 4GB RAM or 60GB RAM, it makes no difference whatsoever. PRTG licenses are upgradeable to meet your own specific needs. You can evaluate if PRTG is your solution with our free trial version.

PRTG is compatible with all the biggest server providers. You can therefore monitor your entire terminal/server park with just one centralized monitoring tool, saving you lots of time and energy when it comes to system management.

A sneak peek into server performance monitoring with PRTG 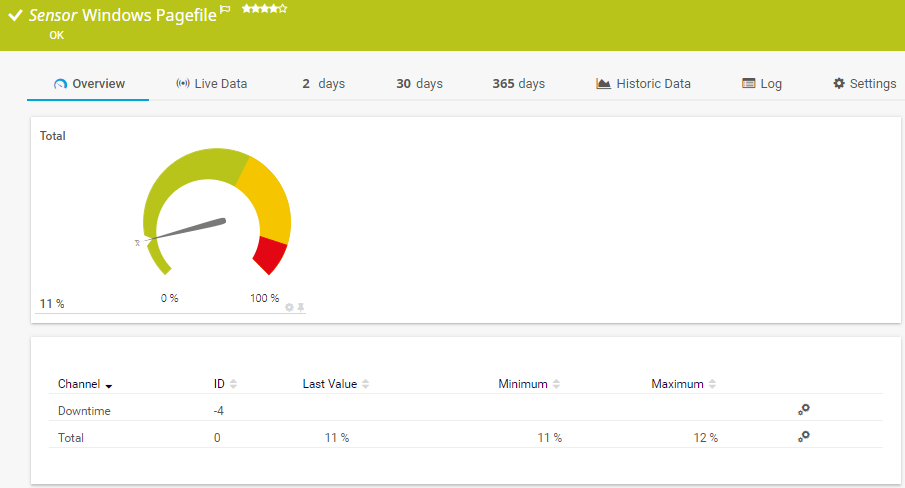 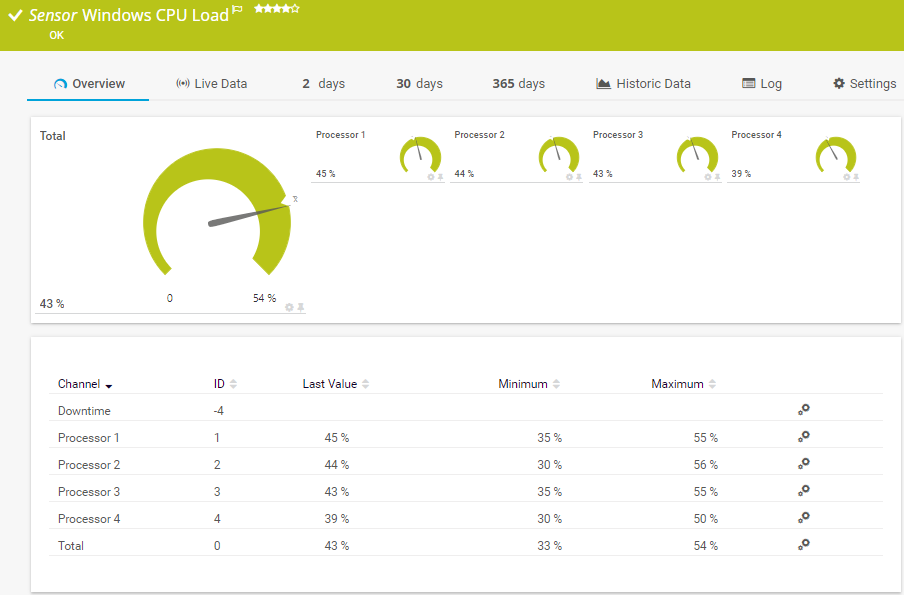 An IP address (internet protocol address) is a numerical representation that uniquely identifies a specific interface on the network. IP addresses are binary numbers but are typically expressed in decimal form (IPv4) or hexadecimal form (IPv6) to make reading and using them easier for humans.
Read more

Are you currently using another monitoring tool? Switching to PRTG is quick and easy. Simply select a range of IP addresses. The Auto Discovery function of PRTG will scan all the devices found within the IP range and automatically create appropriate sensors. You’ll get an initial monitoring overview of your network when opening PRTG for the very first time.

“In all, when it comes to on-premises monitoring solutions, PRTG Network Monitor is very hard to beat. It provides a terrific range of sensor options for both local devices and cloud services, along with plenty of monitoring facilities, yet it’s easy to manage, and comes with a simple, affordable pricing scheme that’s perfect for SMBs.”

Your network at a glance – even on the go 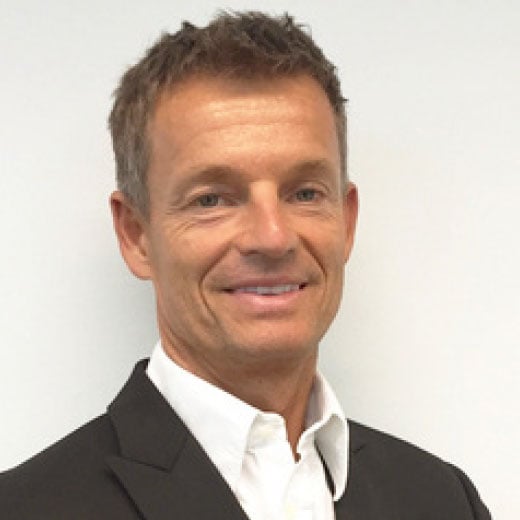 “The support we received from Paessler AG was extremely reassuring. Their reaction time, know-how, and solutions were outstanding in every department.” 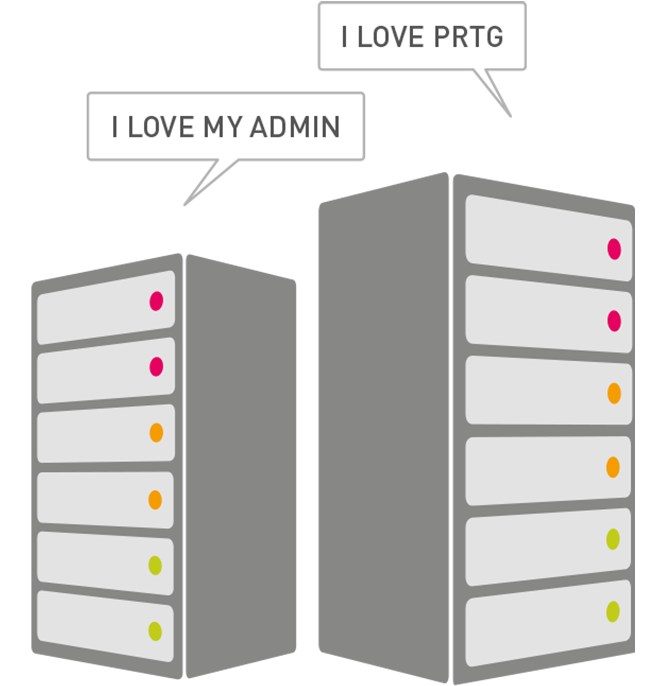 For example: write a script, let it run in short intervals with the help of a user-defined script sensor, and then measure the corresponding hardware parameters on the server. You can of course also use an external tool for a load test and let PRTG capture the data. Analyze the ensuing data to identify the effects on your entire network. Perform such a test in a targeted manner and over a short period of time.

You want to know more about other network-related monitoring topics?

Here you find everything about...

PRTG is worth it: You’ll optimize your entire IT!

The costs for a one-year PRTG license usually pay for themselves within a few weeks.

We asked: would you recommend PRTG?
Over 95% of our customers say yes!

Paessler AG conducted trials in over 600 IT departments worldwide to tune its network monitoring software closer to the needs of sysadmins.
The result of the survey: over 95% of the participants would recommend PRTG – or already have. 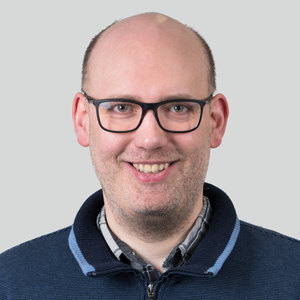 „Hey Arne, how do I avoid false alarms during server maintenance?“

“In practice, repairs in the short-term will be necessary. While working, your monitoring will not trigger false alarms. The one-time maintenance window allows you to pause monitoring for each individual device or device group. For regular maintenance, with PRTG you can easily create an automated schedule.”

Time and again, backups are responsible for server problems. Large-scale and repeated backups can lead to massive spikes in both the server load and network traffic. Often the SQL server crashes and database queries only come back after long delays. Administrators of Windows servers also frequently report problems with backups.

PRTG lets you determine where the bottleneck lies so you can get to the root of the problem - e.g. if at night, when backups occur, hardware parameters yield extremely elevated values. PRTG monitoring will show you the areas in your network which need upgrading. A short-term option: Spread out your backups over several systems or points in time.

PRTG comes with sensors for all the major server manufacturers.
Check out the full array of PRTG sensors in our sensor-list. Some of these include:

For Windows, feel free to use the above-mentioned Windows CPU Load Sensor and Windows Physical Disk Sensor. PRTG also comes with pre-configured sensors for many other Windows counters like Windows Performance Counter.

For your IBM servers, take advantage of our IBM System X sensors, among others. The Health Sensor combines several measurements into one sensor, making it possible to monitor a variety of different performance data.

HP is a large, established hardware provider used by many of the world’s biggest companies. PRTG is also suitable for HPE servers and comes with sensors that are specially designed to run on them.

Looking to monitor your Dell servers and improve their performance? PRTG’s predefined sensors work like a charm.

Improving the performance of Windows servers

PRTG provides comprehensive database monitoring. With PRTG, you can monitor all SQL software.

PRTG monitors the availability, load times, and processes of your websites – even from various locations around the world.

PRTG monitors devices, applications, and bandwidth usage of your network. When network loads get too high, you get an instant notification.