What is an IP address? 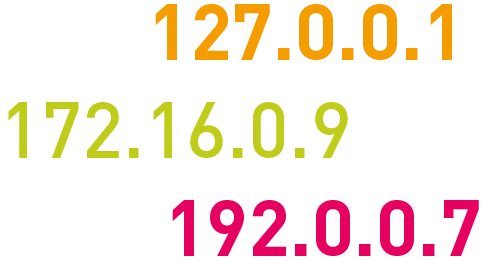 An IP address (internet protocol address) is a numerical representation that uniquely identifies a specific interface on the network.

The total usable address pool of both versions is reduced by various reserved addresses and other considerations.

IP is designed to work over a dynamic network. This means that IP must work without a central directory or monitor, and that it cannot rely upon specific links or nodes existing. IP is a connectionless protocol that is datagram-oriented., so each packet must contain the source IP address, destination IP address, and other data in the header to be successfully delivered.

Most internet traffic is TCP/IP.

There are two versions of IP in use today, IPv4 and IPv6. The original IPv4 protocol is still used today on both the internet, and many corporate networks. However, the IPv4 protocol only allowed for 232 addresses. This, coupled with how addresses were allocated, led to a situation where there would not be enough unique addresses for all devices connected to the internet.

IPv6 was developed by the Internet Engineering Task Force (IETF), and was formalized in 1998. This upgrade substantially increased the available address space and allowed for 2128 addresses. In addition, there were changes to improve the efficiency of IP packet headers, as well as improvements to routing and security.

IPv4 addresses are actually 32-bit binary numbers, consisting of the two subaddresses (identifiers) mentioned above which, respectively, identify the network and the host to the network, with an imaginary boundary separating the two. An IP address is, as such, generally shown as 4 octets of numbers from 0-255 represented in decimal form instead of binary form.

The binary number is important because that will determine which class of network the IP address belongs to.

An IPv4 address is typically expressed in dotted-decimal notation, with every eight bits (octet) represented by a number from one to 255, each separated by a dot. An example IPv4 address would look like this:

A packet with a destination address that is not on the same network as the source address will be forwarded, or routed, to the appropriate network. Once on the correct network, the host part of the address determines which interface the packet gets delivered to.

A single IP address identifies both a network, and a unique interface on that network. A subnet mask can also be written in dotted decimal notation and determines where the network part of an IP address ends, and the host portion of the address begins.

The bits marking the subnet mask must be consecutive ones. Most subnet masks start with 255. and continue on until the network mask ends. A Class C subnet mask would be 255.255.255.0.

Before variable length subnet masks (introduced with RFC-1519 in 1993) allowed networks of almost any size to be configured regardless of the actual address, the IPv4 address space was broken into five classes as follows:

However, any address that begins with 127. is considered a loopback address.

Example for a Class A IP address:

Example for a Class B IP address:

Class E networks are defined by having the first four network address bits as 1. That encompasses addresses from 240.0.0.0 to 255.255.255.255. While this class is reserved, its usage was never defined. As a result, most network implementations discard these addresses as illegal or undefined. The exception is 255.255.255.255, which is used as a broadcast address.

Certain IPv4 addresses are set aside for specific uses:

The original IPv4 specification was designed for the DARPA network that would eventually become the internet. Originally a test network, no one contemplated how many addresses might be needed in the future. At the time, the 232 addresses (4.3 billion) were certainly considered sufficient. However, over time, it became apparent that as currently implemented, the IPv4 address space would not be big enough for a worldwide internet with numerous connected devices per person. The last top-level address blocks were allocated in 2011.

To avoid the seemingly reoccurring issue in technology, where a specification’s limitation seems more than sufficient at the time, but inevitably becomes too small, the designers of IPv6 created an enormous address space for IPv6. The address size was increased from 32 bits in IPv4 to 128 bits in IPv6.

The IPv6 has a theoretical limit of 3.4 x 1038 addresses. That’s over 340 undecillion addresses, which is reportedly enough addresses to assign one to every single atom on the surface of the earth.

IPv6 addresses are represented by eight sets of four hexadecimal digits, and each set of numbers is separated by a colon. An example IPv6 address would look like this:

With IPv6 addresses being so long, there are conventions to allow for their abbreviation. First, leading zeros from any one group of numbers may be eliminated. For example, :0033: can be written as :33:

Second, any consecutive sections of zeros can be represented by a double colon. This may be done only once in any address. The number of sections removed using this abbreviation can be determined as the number required to bring the address back up to eight sections. For example, 2DAB::DD72:2C4A would need to have five sections of zeroes added back in place of the double colon.

Like in IPv4 certain address blocks are reserved for private networks. These addresses are not routed over the public internet. In IPv6, private addresses are called Unique Local Addresses (ULA). Addresses from the FC00:: /7 block are ignored and not routed by default.

In both IPv4 and IPv6, remembering the IP address of every device is not possible, except on the smallest of networks. Name resolution provides a way to lookup an IP address from an easier to use name.

Do you need a professional IP scanning software? PRTG is your comprehensive IP Monitoring Tool and keeps track of your whole network. More about IP Monitoring >