TLS stands for Transport Layer Security. It is a cryptographic protocol used to secure data sent over a network, like internet traffic. General use cases include securing email, VOIP, online transactions, file transfers, and instant messages. TLS is designed to prevent data from being eavesdropped on or tampered with. It protects the integrity of private communications and sensitive information, including browsing habits, personal correspondence, online chat, conference calls, passwords, account numbers and other financial data, and social security numbers.

TLS secures the transmission and delivery of data. It does not secure data at endpoints and it does not encrypt data. It is a security protocol for HTTPS connections and not for insecure HTTP connections. 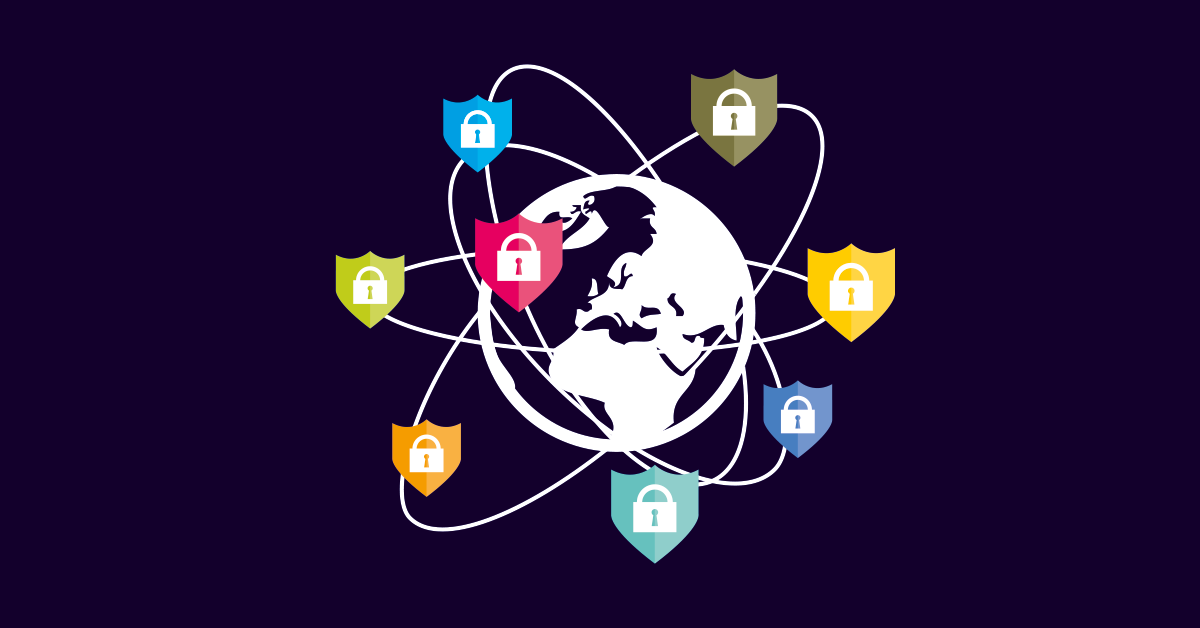 TLS is the successor of the Secure Sockets Layer (SSL) protocol. Netscape originally developed SSL in 1994 to secure its browser, Netscape Navigator. The last version of SSL was SSL 3.0. The first version of TLS, released in 1999, is based on SSL 3.0.

The terms SSL and TLS are often used interchangeably. This is because the first version of TLS, 1.0, was initially developed as SSL version 3.1. This means that, unless specifically stated otherwise, what is marketed today as an SSL certificate usually uses the TLS protocol. The term SSL is still used because people are more familiar with it. The term SSL/TLS is often used to describe the protocol.

The latest version of TLS is TLS 1.3, published in 2018 by the Internet Engineering Task Force (IETF). The IETF is an international standards organization originally tasked with orchestrating the development of the new protocol.

SSL 3.0 was officially deprecated in 2015. However, TLS provides backward compatibility for some older devices using SSL.

Most of today’s web applications use TLS 1.2. The adoption of TLS 1.3 is expected to take time. Google has estimated that less than one percent of websites rely on TLS 1.0 or 1.1. There are workarounds, for example the LS_FALLBACK_SCSV extension, for legacy applications that are not compatible with TLS technology.

Where is it used?

TLS is used to secure application layer protocols like FTP, HTTP, and SMTP, for example. These protocols provide most of the functions used to communicate on the internet, like sending emails, chatting, or downloading data.

Why is it used?

TLS encryption helps protect internet applications from cyberattacks and data breaches. The protocol is the secure connection standard for most popular browsers.

Google Chrome recently started to warn users accessing HTTP pages that these pages are not secure. For businesses, the concern is that this could result in reduced customer trust. Therefore, Google, Apple, and Microsoft encourage the use of at least TLS 1.2.

TLS 1.2 and 1.3 support the latest cipher suites and algorithms, and have removed hash functions that are not secure, for example SHA-1 and MD5.

How does it work?

The TLS handshake begins with the negotiation of a TLS version and the selection of an appropriate cipher suite. A cipher suite is a combination of algorithms. Each algorithm has a task, for example, encryption, authentication, and key exchange. The server selects what key exchange algorithm will be used up front. 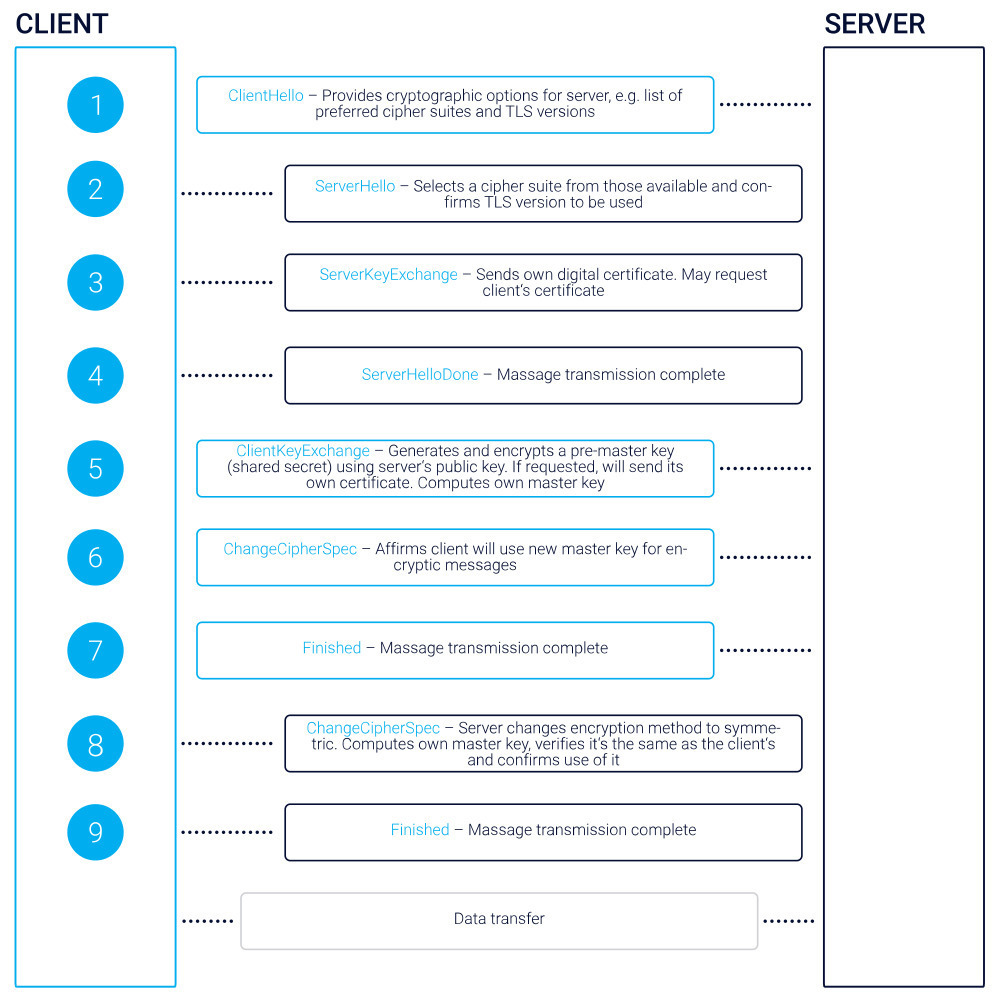 As of TLS 1.3, the protocol is more efficient. The client makes a guess as to the best cryptographic protocol for the connection and shares its key in the first message it sends to the server. TLS 1.3 uses the elliptic-curve Diffie–Hellman (ECDH) protocol. ECDH is a key agreement protocol that enables a client and a server to share a secret key or to create a new secret key over a channel that is not secure.

TLS 1.3 was introduced to reduce the use of unsafe technologies like outdated algorithms, enable backward compatibility with older versions of the protocol, speed up connections, improve security, and use newer techniques like allowing fewer, more trusted cipher options.

Traditionally, one of the most popular ways to exchange secure session keys was the RSA encryption algorithm. RSA has been somewhat discredited because it does not provide an ephemeral (temporary or session-specific) key mode, something that is required for Perfect Forward Secrecy (PFS). PFS ensures that if an attacker saves encrypted information and somehow manages to steal the associated private key, they will still not be able to decrypt the information.

Four new features in TLS 1.3 help to speed up the TLS handshake. TLS Session Resumption checks whether a server and a client have communicated before, and if they have, some security checks are skipped. TLS False Start allows a server and a client to start transmitting data before the TLS handshake is finalized. The TLS 1.3 handshake requires only one round trip, instead of the two used in TLS 1.2. In TLS 1.2 and earlier versions, the first round trip includes the meet-and-greet steps. The second round trip includes the exchange of keys and the change of the encryption type from asymmetric to symmetric. Finally, Zero Round Trip Time Resumption (0-RTT) enables the generation of a master resumption key.

For website owners, TLS may appear to negatively affect the performance of their website. For example, in the event of high-volume traffic or reduced computing resources, TLS may appear to contribute to longer website loading times. A potential vulnerability is that TLS may sometimes allow a misconfigured server to choose a weak encryption method. The initial implementations of TLS could spark a temporary drop in traffic as the website may need to be reindexed. In addition, older add-ons and plugins may not be HTTPS compatible.

TLS may mistake a firewall for a man-in-the-middle attack. Designed to provide comprehensive end-to-end encryption and security, TLS prevents network security tools from inspecting traffic to detect potential malware. To prevent a man-in-the-middle attack, the client is prevented from inspecting its own data and from ensuring that it is free of malware. The means to do this inspection is via a middlebox, but the middlebox can be mistakenly identified by TLS as a man in the middle and can sometimes prevent legitimate access to the server. The financial industry has lobbied for changes to the way middleboxes work.

TLS is also vulnerable to downgrade attacks. RSA is a key exchange algorithm used by all versions of TLS except version 1.3. RSA determines how a client and a server will authenticate their credentials during the TLS handshake with the goal of negotiating a shared secret. However, RSA is vulnerable to side-channel attacks. These kinds of attacks are indirect and unintended. They are usually a result of a faulty implementation of a cryptography system, which unintentionally allows the leakage of information that an attacker can use to discover the private key for a conversation. This can be compared to a thief challenged by the security system of your car. Instead of trying to break into the car on site where the alarm will alert you, the thief simply loads the vehicle onto a flatbed truck, takes it somewhere else, and breaks in there.

Despite those weaknesses, TLS is indispensable in online communication. Regular updates of the protocol ensure further improvements in security and performance.