1. What is Bandwidth in Computing?

4. Bandwidth vs. Speed vs. Throughput

Bandwidth is measured as the amount of data that can be transferred from one point to another within a network in a specific amount of time. Typically, bandwidth is expressed as a bitrate and measured in bits per second (bps). 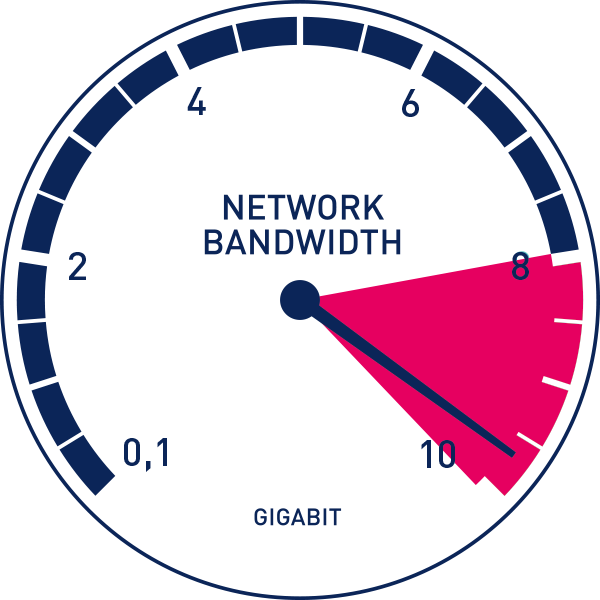 The term bandwidth refers to the transmission capacity of a connection and is an important factor when determining the quality and speed of a network or the internet connection.

There are several different ways to measure bandwidth. Some measurements are used to calculate current data flow, while others measure maximum flow, typical flow, or what is considered to be good flow.

Bandwidth is also a key concept in several other technological fields. In signal processing, for example, it is used to describe the difference between the upper and lower frequencies in a transmission such as a radio signal and is typically measured in hertz (Hz).

After terabit, there are petabit, exabit, zettabit, and yottabit, each representing an additional power of 10.

One byte is eight bits.

The same metric prefixes can be used with bytes as with bits. Thus, 1 TB/s is one terabyte per second.

Are you getting the full bandwidth? Find out with PRTG Network Monitor!

Are your service providers giving you the full bandwidth? Is your bandwidth stable? Are there any bandwidth hogs? Find out by using the professional Bandwidth Monitoring Tool PRTG.

TTCP measures throughput on an IP network between two hosts. One host is the receiver, the other the sender. Each side displays the number of bytes transmitted and the time for each packet to complete the one-way trip.

PRTG provides a graphical interface and charts for measuring bandwidth trends over longer periods of time, and can measure traffic between different interfaces.

Typically, to measure bandwidth, the total amount of traffic sent and received across a specific period of time is counted. The resulting measurements are then expressed as a per-second number.

Another method of measuring bandwidth is to transfer a file, or several files, of known size and count how long the transfer takes. The result is converted into bps by dividing the size of the files by the amount of time the transfer required. Most internet speed tests use this method to calculate the connection speed of a user’s computer to the internet.

While there is no way to measure total available bandwidth, there are many ways to define measured bandwidth, depending on the need.

Effective bandwidth – The highest reliable transmission rate. Always lower than the theoretical maximum. Sometimes considered the best usable bandwidth. Necessary for understanding the amount of traffic a connection can support.

Throughput – The average rate of successful data transfer; useful for understanding the typical or usual speed of a connection. Throughput is the size of the transfer divided by the time it takes for the transfer to complete. Measured in bytes per second, throughput can be compared to the effective bandwidth and the theoretical maximum as a way of determining how well the connection is performing.

Total transfer method – Counts all traffic across a period of set time, typically a month. This is most useful for billing based on how much bandwidth is used.

95th percentile method – To avoid having bandwidth measurements skewed by spikes in usage, carriers often use the 95th percentile method. The idea is to continuously measure bandwidth usage over time, and then remove the top 5 percent of use. This is useful for billing based on how much bandwidth is ‘normally’ used in a set period.

In real world networks, bandwidth varies over time depending on use and network connections. As a result, a single bandwidth measurement says very little about actual bandwidth usage. A series of measurements can be more useful when determining averages or trends.

Bandwidth vs. speed vs. throughput

There are many ways to think about the flow of data in a network. The speed of a network is defined as the bit rate of the circuit, determined by the physical signal speed of the medium.

Bandwidth is how much of the physical circuit’s capacity can be used to transmit data and is determined by how much of the network capacity is available based on the connection. While a Gigabit Ethernet network connection would allow for 1 Gbps, the bandwidth available to a computer connected by a Fast Ethernet card would only be 100 Mbps.

There are several reasons to measure bandwidth. Low usable bandwidth compared to the theoretical maximum bandwidth may be indicative of network problems, particularly if there are widely different usable bandwidths from different parts of a network that are designed to operate the same.

Additionally, measuring bandwidth is necessary to ensure that any paid connections are living up to their promise. Home users may run an online bandwidth test such as the DSLReports speed test to see just how much of that “up to 40 Mb/s” connection their internet service provider (ISP) charges them for they actually get to use. Corporate connections might be better served by measuring throughput between offices connected by a carrier-leased line connection.

In order to implement proper bandwidth management, or Quality of Service (QoS) controls, one must first understand what bandwidth is used. Once determined, a continuous measurement will ensure that all users get the necessary bandwidth.

Once bandwidth usage patterns are understood, and if specific users or applications are degrading network performance for others, tools can be used to limit the amount of bandwidth they are using.

Some types of connections have a maximum defined bandwidth. Actual bandwidth depends on many factors including environment, cabling, and usage, and is usually less than the theoretical maximum.

Wireless network connection speeds vary widely based on the conditions of the connection. The numbers below are the maximum bandwidth speeds according to the standard or specification.

The WiFi standard 802.11bf will not only be used for communication but also as a complete sensing paradigm. This will expand the possibilities of WiFi and e.g. detect which people or objects are moving within its range of motion.

The upcoming version can be used in industrial and commercial environments in manufacturing systems, corporate networks, and test and measurement equipment.

Bandwidth is most often purchased from telecommunications companies. Most consumer bandwidth is sold as “up to” meaning that the customer may get up to 40 MB/s, but not always have that speed while using the connection. Speeds may be higher or lower at different times of the day or under different circumstances. Corporate bandwidth is also typically purchased from telecommunications companies. However, many corporate agreements come with contractual performance measures that must be met, including a minimum usable bandwidth, minimum uptime, and other metrics.

Additionally, bandwidth metering may be used to charge for specific usage rather than a full connection. For example, a website owner may pay the website host only for the amount of bandwidth used by that specific website over a period of time, such as a monthly billing period.

While modern protocols are pretty good about not losing any packets, limited bandwidth can still cause operations to be too long to complete, resulting in timeouts or other issues. These issues can cause application errors or database errors. When backing up or copying data over a network, too little bandwidth can cause backups to take too long, often running into other batch processes, or even main working hours.

In addition, users relying on a connection with too little bandwidth may notice long lag times between when they do something, like click a button, and the response to that action. In the case of waiting for information or other data to load, too little bandwidth can cause operations to take a long time, or even cause users to give up waiting.

For users attempting to make phone calls over a network, such as Voice over Internet Protocol (VoIP), having too little bandwidth results in lower quality calls. Most VoIP systems reduce the fidelity of a call based on the available bandwidth. If there is not enough bandwidth, the call may sound “tinny” or “echo-y”. If the quality is bad enough, there may be actual gaps in the call where parts of the conversation are missed.

Video calls require even more bandwidth. Video calls made without the necessary bandwidth will not only result in bad sound quality, but also low quality or jittery video.

For internet users, the United States Federal Communications Commission (FCC) recommends a minimum bandwidth of 4 Mbps for adequate performance when streaming a video in HD quality. Many video players will work with less bandwidth by “buffering”, or downloading data ahead of when it is actually displayed. If the connection is too slow, users will either have to wait a long time before the video starts while the system buffers a lot of data, or the video may stop suddenly when the system runs out of buffered video to play.

Gamers are often frustrated by limited bandwidth as well. While playing against other players online, players with faster connections see what is happening quicker, and the data about their reactions is transmitted and received faster. The FCC recommends a minimum download speed of 4 Mbps for Online Multiplayer Gaming in HD.

Network design and infrastructure can create bandwidth issues as well. Latency measures the delays on a network that may be causing lower throughput or goodput. A low latency network has short delays, while a high latency network has longer delays. High latency prevents data from fully using the network’s capabilities, therefore decreasing the bandwidth.

Tools such as Ping and traceroute can help troubleshoot basic issues.
Pinging a test server, for example, will return information on how quickly data can be sent and received, as well as average round trip times. High ping times indicate higher latency in the network.
The traceroute tool can help determine if there are too many individual network connections, or hops, along the connection path. In addition, traceroute returns the time taken by each hop. A longer time on a single hop may pinpoint the source of an issue.

TTCP measures the time it takes for data to travel from one network interface to another with a receiver on the other end. This eliminates the return trip from the calculation and may help pinpoint issues quickly. If the measured bandwidth is less than expected, further measurements can isolate the issue. Does a measurement to another interface on the same network work faster? If so, where is the difference between the two systems? By continually measuring bandwidth, administrators can target the bottlenecks in the network.

With its data gathering and graphing interface, PRTG can also help troubleshoot bandwidth problems that are not related to design. For example, by measuring bandwidth usage over time, it may be determined that certain users or applications are sometimes using higher amounts of bandwidth and causing network congestion and slowing network responsiveness and internet speed for other users.

Find out more about bandwidth monitoring with PRTG >

Are you getting the full bandwidth? Find out with PRTG Network Monitor!

Are your service providers giving you the full bandwidth? Is your bandwidth stable? Are there any bandwidth hogs? Find out by using the professional Bandwidth Monitoring Tool PRTG.

This is a short video about bandwidth monitoring