5. How to use SNMP for monitoring

SNMP stands for Simple Network Monitoring Protocol. It is a protocol for management information transfer in networks, for use in LANs especially, depending on the chosen version. 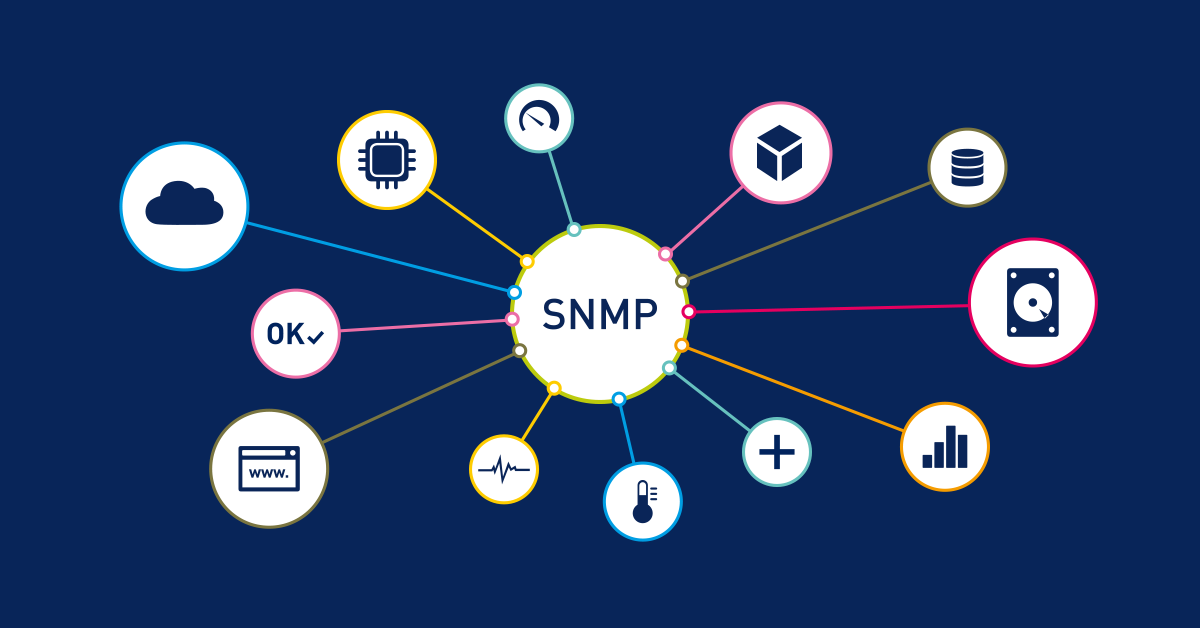 Its usefulness in network administration comes from the fact that it allows information about network-connected devices to be collected in a standardized way across a large variety of hardware and software types.

Hardly any network admin renounces SNMP. Rather, most of them confidently rely on it because nearly all kinds of devices from many different manufacturers support SNMP, which helps them achieve comprehensive monitoring thanks to the SNMP technology.

SNMP v1 was defined in 1988 and was based on SGMP (RFC 1028). Then, it was broadly accepted and used. It is still used today, almost 30 years later, which is nearly an eternity in IT. SNMP v1 provides the basic functionalities for data polling and is relatively easy to use. It doesn't create much overhead because it doesn't include any encryption algorithms. So, for security reasons, use SNMP v1 in LANs only. Its biggest limitation is its 32-bit counter architecture, which is not enough for today’s gigabyte networks or larger.

If users want to manage networks in a WAN, the CMISE/CMIP protocol is the right protocol to go for.

SNMP v2 supports 64-bit counters but still sends critical data as clear text, so it does not really enhance security. And if users come across SNMP v2, it is mostly "SNMP v2c" that manufacturers or networkers are talking about, with the "c" standing for "community". Two other SNMP v2 versions exist, SNMP v2p and SNMP v2u, but they are only implemented in rare cases.

Defined in 2002, SNMP v3 includes the advantages of SNMP v2c and adds security solutions like user accounts, authentication, and optional encryption of data packages. This enhances security and makes SNMP v3 the recommended SNMP version when it comes to security. However, it also makes configuration more difficult, specifically user management. Therefore, much more processing power is needed, especially with short monitoring intervals that create a great number of SNMP messages.

How does SNMP work?

A network normally has at least one computer or server running monitoring software. It is the managing entity. A network will also most probably have a few, or many, or even really many, other devices: switches, routers, workstations, server racks, printers, coffee machines, or anything else that needs to be monitored. They are the managed devices. 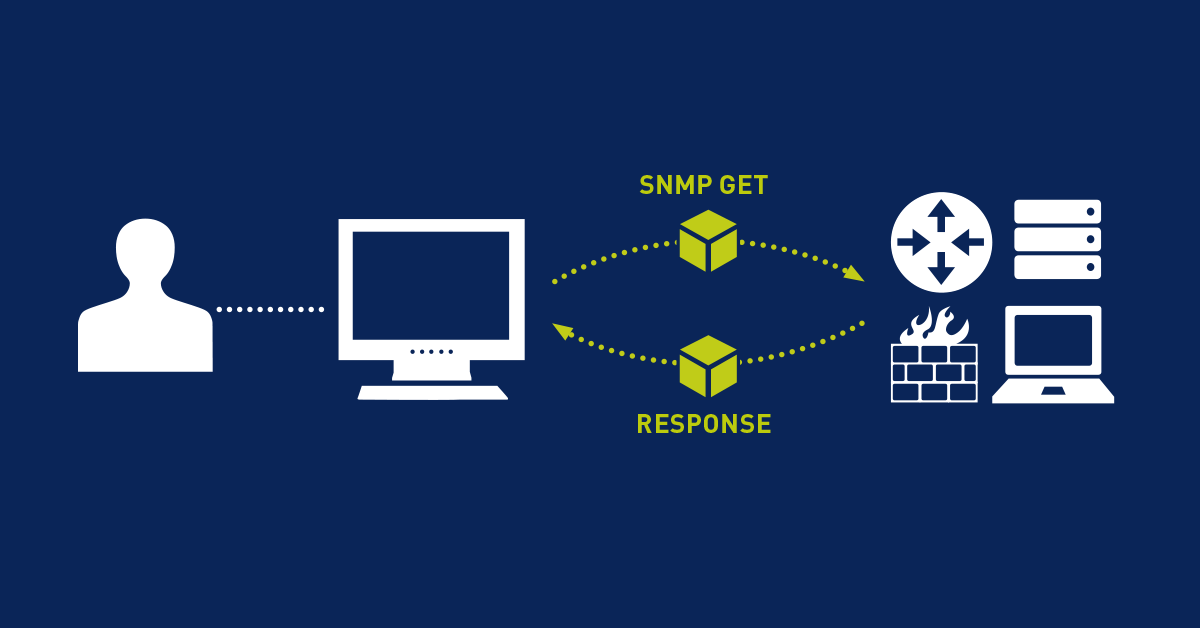 Basically, the transfer of SNMP messages can be compared to the typical communication between a client and a server, offering both pull and push technologies. The pull (or poll) technology is the most common communication type where a client, like the network management software on the managing entity, sends out a request to solicit a response from a server, or managed device. Its counterpart, the push technology, allows the managed device to “speak” and send out an SNMP message upon an event.

In SNMP terminology, for example, a GET request from an SNMP manager (client) follows the pull model, whereas an SNMP trap is "pushed out" by an SNMP agent (server) without any previous request.

There are different types of SNMP messages that can be used to set up network monitoring via SNMP:

The Simple Network Management Protocol is part of the Internet Protocol Suite as an application layer (layer 7) protocol of the OSI model.

SNMP uses the User Datagram Protocol (UDP) to transfer messages. It is necessary that UDP packets can make it from the agent to the manager for monitoring to be successful. This typically works by default on a local network but additional router configuration is needed to allow such packets to traverse wider networks.

What are OIDs and MIBs?

The object (OID) hierarchy is generally depicted as a tree with different levels from the root to the single leaves. Each OID has an address that follows the levels of the OID tree.

Top level and general MIB object IDs are asssigned by different standard organizations like ISO. Vendors define OIDs for their own products in private branches of the OID tree.

MIB stands for Management Information Base, and refers to an independent format for the definition of management information. In other words, MIBs contain OIDs in a well-defined way. In an MIB, every object gets its definition that defines its properties within the device to be managed. The objects are accessed using the SNMP protocol.

Why OIDs and MIBs are needed

Every piece of management information that can be obtained via SNMP – be it the memory usage of a server, the traffic on a switch, or the queued files on a printer – is individually addressed by its OID. This property is the reason why OIDs are needed. They help admins to identify and monitor the objects that they have in their network and thus make monitoring meaningful.

For the managing entity and a managed device in networks to communicate successfully, both of them need to know which OIDs are available.

This is the reason why MIBs exist and why system admins need them. Every object that has to be monitored on a device has to be provided by the device's MIB(s). Therefore, admins have to make sure that all necessary MIBs are stored on SNMP agent devices as well as on the managing entity system. An MIB file can be easily recognized via the extensions .my or .mib.

For detailed information, please view this link: SNMP Explained: What You Must Know About Monitoring via MIBs and OIDs. 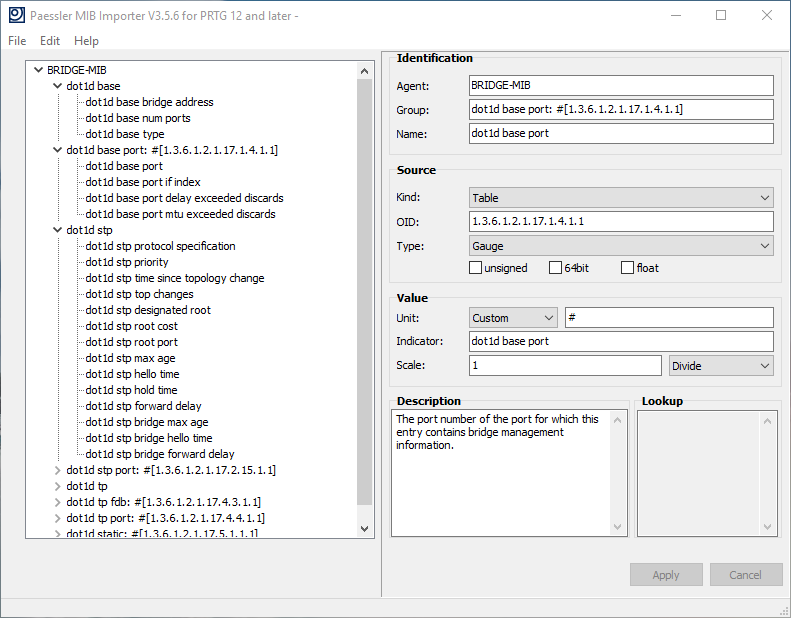 Device manufacturers normally deliver the necessary MIBs along with their SNMP-supporting products. Depending on the monitoring solution used, one might have to convert MIBs to product specific MIB versions.

Why SNMP is so universal: SMI

There are various factors that make SNMP so universal. Structure of Management Information (SMI) provides a commonly understood and standardized structure for the data types and for the transfer of them. Please also consider this link to get to the bottom of why SMI is also inextricably tied to OIDs and MIBs. More about SMI here.

Why would someone use SNMP? Well, as its name Simple Network Management Protocol says, it can be used for network management. In order to manage a network, admins need information about it. This is where SNMP has its greatest value. It gathers all the data from many devices and allows to put this data into context, which again allows to track issues, to make decisions based on real data, and to take control wherever necessary. That's what network management is all about. And that's why sysadmins will profit from using SNMP to monitor networks.

But there is more to it. A suitable monitoring tool, for example PRTG, will also help to get the most out of the data that admins receive thanks to SNMP and empower every network admin to monitor and manage their networks on time and proactively.

It can be an adventure to keep track of the vast quantity of network devices that modern networks comprise. Ideally, monitoring solutions support admins by offering a suitable way to structure and group devices and by presenting a clear overview that allows to go into detail whenever needed to ensure overall system health. 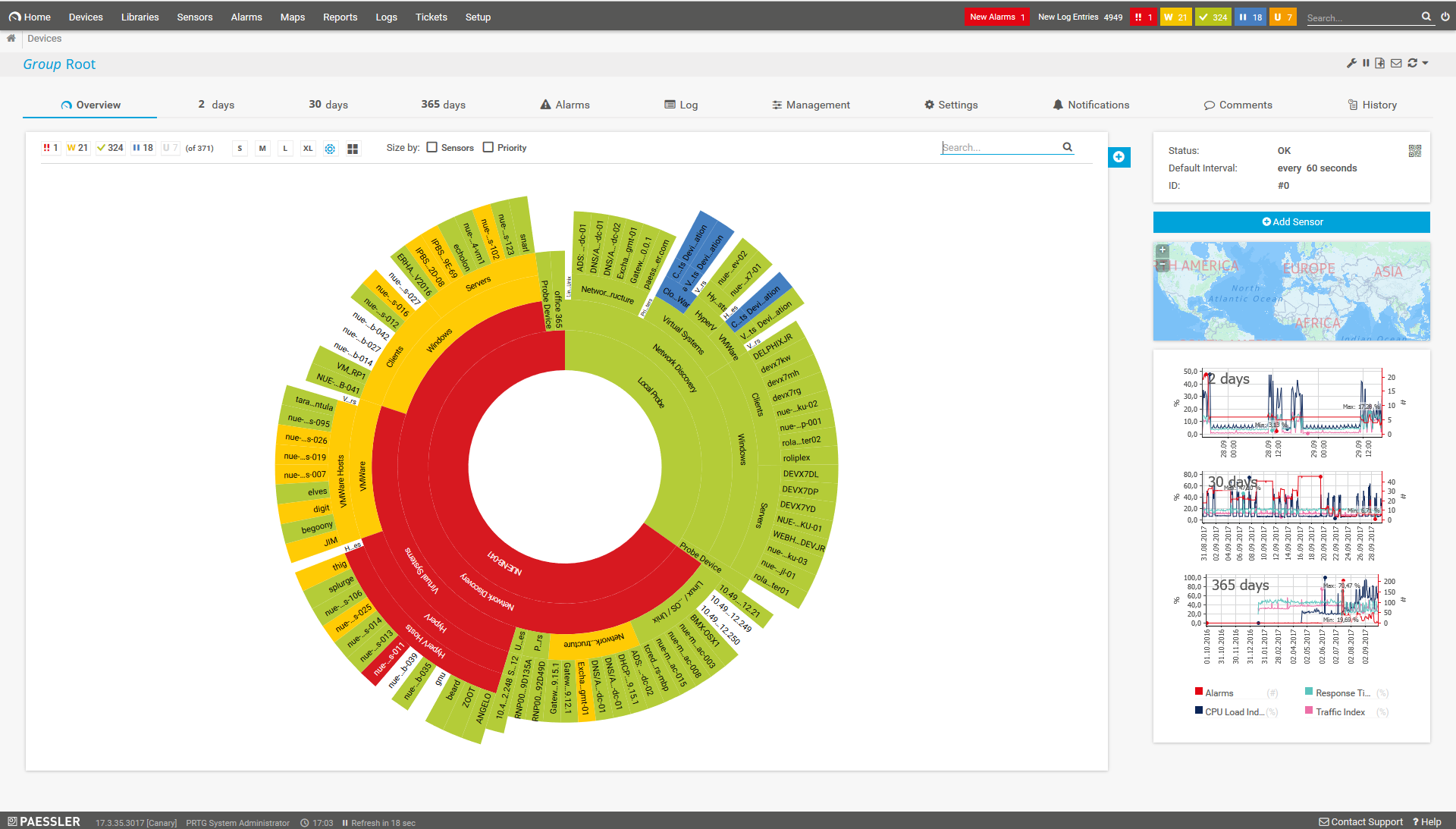 Thanks to monitoring tools, sysadmins know exactly where to take action when a problem arises, and sometimes they even know before it occurs. Being informed on time is absolutely critical, so monitoring solutions should offer enough ways to notify the admin – like email, push notifications, SMS text messages (to be on the safe side when there’s no internet, for example), execution of a program, or even alerts on a smartwatch.

Network monitoring will result in a lot of data in monitoring database. Let the numbers speak for themselves and use them to create reports and statistics. Analysis will not only provide insight into networks, but also help justify IT needs to the accounting or managing board. Visual dashboards will also help to be more successful.

Data analysis will show the trends for individual networks and allow to plan ahead. The results: reliability, speed, and efficiency.

Setting up monitoring for large networks can be very tedious and time-consuming. Monitoring tools will automate and speed that up for the users and provide, for example, flexible network auto-discoveries or default templates for widely used network infrastructure products. And who would have thought? These technologies most probably use SNMP, too!

How PRTG can assist you monitor your network!

A managed device is a node that has an SNMP agent and resides on a managed network. These devices can be routers and access servers, switches, hubs, computer hosts, IP telephones, printers etc.

SNMP a pillar in IT: What you must know about its versions and FCAPS

How to enable SNMP on your operating system

SNMP explained: What you must know about monitoring via OIDs and MIBs

If you use SNMP a lot and don't know what SMI is, then read this

SNMP doesn't work! Can somebody out there please help?!