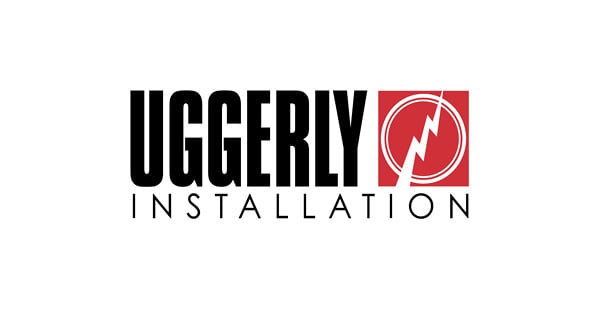 Uggerly Installation is the effective connection between technical installations and customers and partners in Jutland, Funen and Zealand. It carries out all kinds of electrical and plumbing installations as well as main and engineering contracts with a focus on providing professional solutions on time. Uggerly Installation is a dynamic North Jutland company with proud traditions and roots in the industry, dating back more than 100 years to the Aalborgian electrical installation company Ryø, founded in 1912.
Find out more about Uggerly at www.uggerly.dk

Uggerly is one of Denmark's leading suppliers of technical installations. The company, which has 310 employees, offers a variety of electrical and plumbing installations, and has solutions for both private customers and companies of all sizes. Uggerly's adaptability in digitalization and new innovations makes them a unique company in the industry.

When Mads Cramer Thomsen first started at Uggerly four years ago, the company used a monitoring program that they had developed themselves. A solution that Mads was not entirely happy with. In fact, they only discovered the problems when they had already arisen, and had begun to affect users. There were no opportunities to stay ahead of the problems.

As this solution was not optimal, Mads began to explore other options for monitoring the network. The criteria for finding the right software was to be able to help customers faster, to detect errors before they occurred, and to have the opportunity to eliminate these problems before users even discovered them. In addition, it was also important for Mads that the new software was easy to install and configure. Of course, the price should fit too.

After careful consideration, Mads decided that PRTG was the right solution for Uggerly.

“PRTG met all our criteria. It is easy to configure, it is possible to monitor many devices out-of-the-box, the ability to create our own custom sensors, and it can be integrated with many different systems,” says Mads.

They have now had their PRTG installation for four years and currently have 826 sensors in use, which monitor LAN, WAN, various web sites on-premises and in the cloud, as well as 25 servers, 15 switches, 2 routers, 1 VPN box, 15 access points, 8 printers, 15 cameras and more in their headquarters and at five branches.

"It may sound a bit strange, but we are actually monitoring our postage meter!"

"PRTG met all of our criteria. It's easy to configure, it's possible to monitor many devices out-of-the-box, the ability to create our own custom sensors, and it can be integrated with many different systems."
Mads Cramer Thomsen

After a series of ransomware attacks around the country, including one of Mads' friends who were hit by a labelling machine, Uggerly decided to increase security. To protect themselves from such attacks, they monitor even more devices than before.

As all ports on their switches are monitored, it is possible to monitor where there is usually a high bandwidth consumption and where there is not. In one concrete example, using PRTG, they were able to detect high bandwidth consumption on a port where this was otherwise not the norm. Mads discovered by chance that the user in question was not even sitting at his computer at this time. Mads therefore rushed to unplug it from the Internet. The problem occurred when that user happened to click on a ransomware link.

“When I accessed the machine, I could see that there was an attempt to make a ransomware attack on the system. However, with the help of PRTG, we were able to act and pull the plug on the Internet before anything happened," says Mads, adding:" This episode helped convince us of how good an investment PRTG is."

PRTG has also helped the IT department to present various issues to management. Historical data from PRTG's reports has made it easier to argue about investing in new equipment.

On the other hand, PRTG can also help the management save money. Recently, the IT department looked more closely at how much uptime they actually had. This topic came to light after a server crashed. Following this incident, management wanted to know if they could still deliver the amount of uptime and response times they promise, or whether to invest in new equipment. However, the firm's PRTG reports were able to show that everything was as it should be and that they were therefore not forced to go out and make a huge investment.

"The information we received from PRTG eventually saved us up to two million kroner." 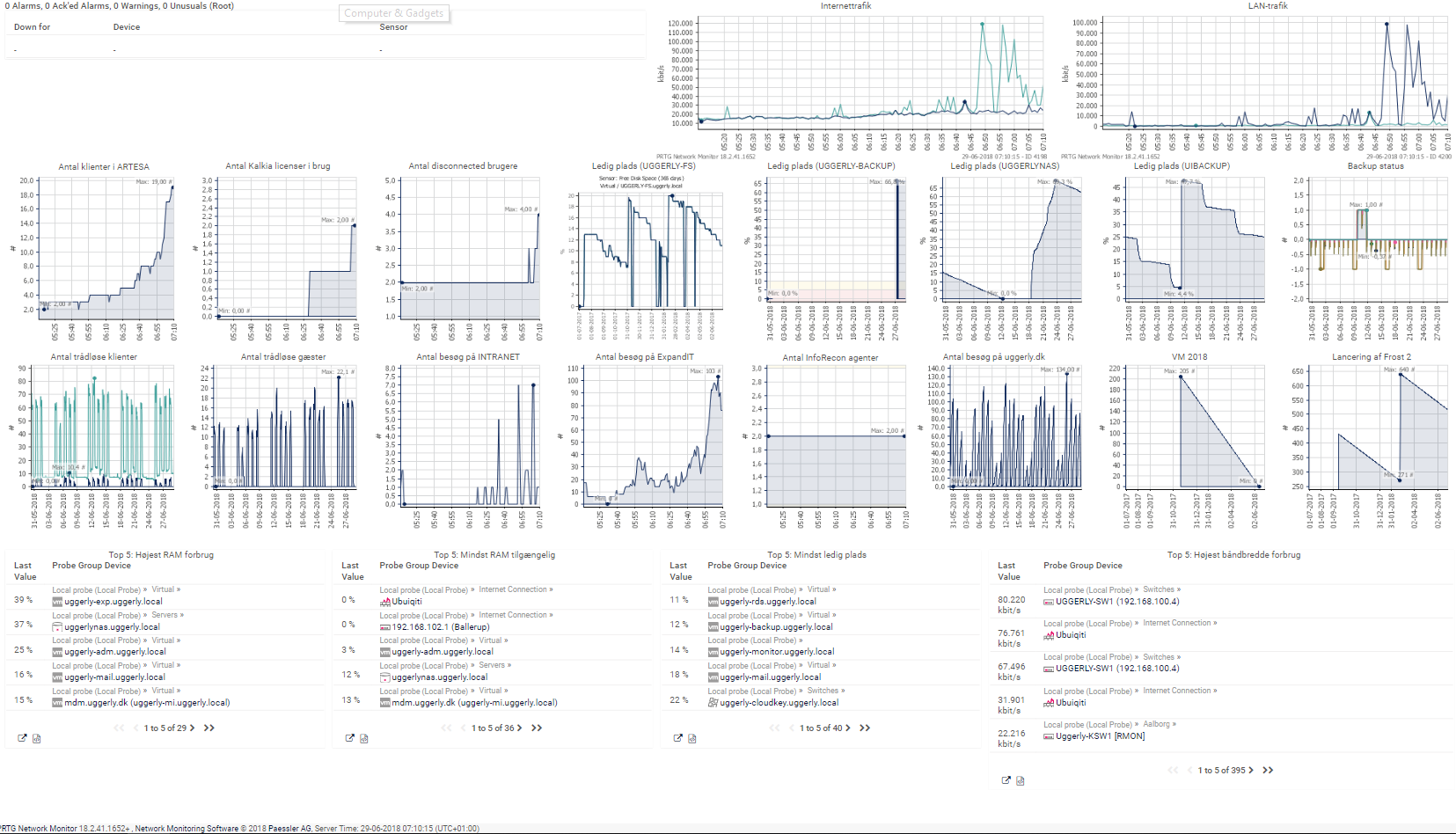 Many options for making custom sensors

Mads also uses the opportunity to make custom sensors, among other things, to monitor their Wi-Fi. This allows Uggerly to keep track of how many users are connected, how many guests are connected, whether updates are available and which licenses are used for specific applications. This helps Mads and his staff see who is actually using their data – are they the users they expect or not? And is the system being used for what it is intended for?

One of their own sensors checks for Ubiquiti updates. This helps the IT department plan the most optimal time to make their updates. They are also able to monitor if their back-up is running properly.

"Not having to keep track of available updates even after working hours has been a big bonus for family life."

To monitor Uggerly's own websites, they use cloud sensors to integrate Google Analytics metrics into PRTG. This allows them to see how many people visit their website and why. This way, they can see how well-promoted they are with their competitors, improve their Google ranking, and evaluate whether or not the content they share is relevant.

Mads cites an example that took place six months ago. Uggerly had shared an article on their website that received an unusually high number of clicks. Their sensor was able to demonstrate that the information they had shared and did not think was relevant was actually quite interesting. Uggerly had shared an article about their new customer, the local super hospital, which attracted a lot of attention from the customers. This article gave customers the impression that if Uggerly is the right solution for a super hospital, then they are very likely to be the right solution for them as well.

Uggerly has two different PRTG dashboards: one of them is for the IT department, which shows the company's network with the most important systems highlighted. The second dashboard is intended for end users and customers, showing traffic lights if the system is running and finding updates if something is not working properly.

“Often when we have visitors we give them a tour where we also go past our PRTG dashboard. When we explain to them what it is and how it works, most people say it's something they just need to have.”

Mads describes PRTG as a good all-rounder that many more companies should know about. One of the biggest benefits of PRTG, according to Mads, is the historical data that has helped give management a solid example of how much uptime they have and have been able to show in which areas of the network needed improvement. Mads also praises the many out-of-the-box features that integrate with many different suppliers, as well as the ability to make their own sensors.

Would you recommend PRTG to a friend or colleague?
“Yes, undoubtedly. I have recommended PRTG several times, and I will continue to do so,” says Mads.