Part of Taunton and Somerset NHS Foundation Trust, Musgrove Park Hospital is the largest general hospital in Somerset, serving a population of over 340,000 and employing 4000 staff. The hospital has 700 beds, 30 wards, 15 operating theatres, an intensive care and high dependency unit, a medical admissions unit, a fully equipped diagnostic imaging department and a purpose built cancer treatment centre. Musgrove Park also has a specialist children's department and Neonatal Intensive Care for all of Somerset.

As the health sector continues to embrace technology, there is growing demand to ensure systems run efficiently. Intensive amounts of data and robust security measures are required to protect sensitive information such as patient medical records and practice management systems data. A delay in the receipt of critical test results or treatment can have a direct impact on a patient's care and comfort.

As a large healthcare organisation, much of the equipment that patients rely on requires a fully functional network. Therefore, any down-time directly affects front line care. As Mike Isaac, Network and Systems Manager at Musgrove Park, explains, "It's imperative that the network is working and we know what's going on at any given time."

From reactive to proactive

Prior to implementing a network monitoring solution, Mike Isaac and his IT team were often aware of problems within the network only after an event had happened. Mike explains, "We had some basic monitoring for key systems but this was very limited, so we would often only know about issues when users reported systems offline."

"The reason to move towards network monitoring was to prevent problems which might make the work of the hospital staff more difficult or time consuming and to enable us to be more proactive," says Mike.

Network monitoring solutions offer healthcare providers the ability to monitor vital data connections, servers, applications and even workstations. This allows Mike and his team to maintain optimum performance across the hospital's entire IT infrastructure.

After investigating alternative solutions, Mike decided on Paessler's PRTG Network Monitor to oversee the Musgrove Park Hospital network following a recommendation from another NHS organisation. Mike explains, "In the past, we had used some of Paessler's free tools to do ad-hoc jobs so we were familiar with PRTG when it was recommended to us." Mike explains. "We were also impressed with its range of features - a key reason for choosing PRTG was that it can pretty much monitor anything you want it to." 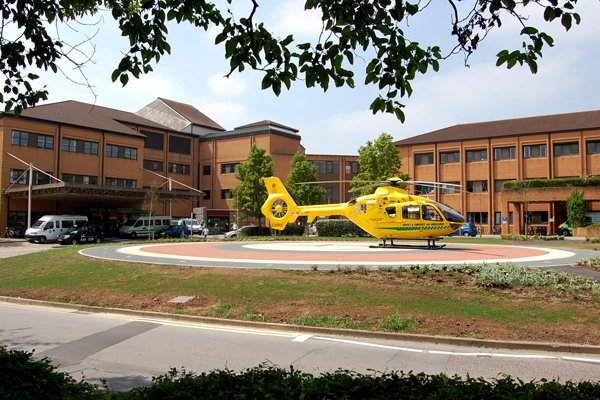 At Musgrove Park Hospital, PRTG monitors everything including servers, UPSs and network switches across three locations - two acute Trusts and an offsite office building.  To monitor the systems, Mike uses the web interface, the windows GUI, the iPRTG for iOS and PRTG droid mobile applications and mobile web page. The alerting system via email and SMS means support staff are able to ensure the IT systems are running smoothly even when off-site.

Before introducing PRTG, a typical issue was hard drives running out of space and eventually causing a system to go offline. Now, the team get an alarm when a hard drive has 10% of free space left and are able to plan and resolve the issue before systems go offline.

"If one PC fails, users can move to another one but if a server based application goes down this isn't an option. Especially if any treatment plans or patient records have to be looked up in that system." explains Mike Isaac.

A better service for all

A network monitoring solution can help health organisations identify real needs, justify the costs of upgrades, and decide where to make IT investments that will deliver the best results. At Musgrove Park Hospital, PRTG monitors both the internal and external network and is set-up on 10,950 sensors. Since introducing PRTG, system downtime has been reduced, and the team have been able to target their work so it is more focussed.

"The amount of maintenance we do has not changed, but with such a high number of servers and switches, PRTG enables us to prioritise within the team the areas where an issue might occur before it happens," says Mike Isaac. "By implementing PRTG, we are now able to deliver a more reliable service for the Hospital to ensure that medical staff are able to deliver frontline care."