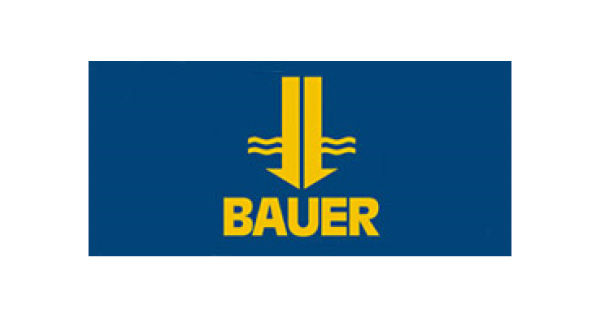 About the BAUER Group

The BAUER Group is a provider of services, machines and products for soil and groundwater. With over 110 subsidiaries, it has a worldwide network on all continents. The BAUER Group's business segments are divided into Construction, Machinery and Resources. In the "Construction" segment, new special foundation engineering methods are offered in addition to the familiar ones, and foundations, excavations, sealing walls and subsoil improvements are carried out worldwide. In the "Machinery" segment, BAUER is the world market leader and supplier of the entire range of equipment for special foundation engineering as well as for the exploration, development and extraction of natural resources. The third segment is "Resources." Here, the company concentrates on innovative products and services for the water, environment and mineral resources sectors.

As an international construction and mechanical engineering company, the BAUER Group has numerous branches worldwide. A small team centrally monitors all branch offices including their IT and non-IT components in Schrobenhausen, Bavaria. The BAUER Group has recently mastered this technical challenge with the help of Paessler's PRTG Network Monitor IT monitoring software.

The BAUER Group has a large network of branches all over the world in order to be able to immediately react to the requirements of its customers. Each branch has a variety of IT systems and equipment. Their reliable operation is the basis of all the construction company's processes. It is therefore essential for the BAUER Group to continuously monitor the function of both IT and non-IT components. The employees in Schrobenhausen used a monitoring solution that offered an acceptable overview, but was disproportionately demanding in terms of operation and maintenance. In addition, individual IT areas still had to be monitored manually, which involved a lot of additional work.

Therefore, a new monitoring software had to be introduced to provide more relief to the IT team. The helpdesk staff defined a clear requirement profile. Among other things, the new solution should be clear and easy to use, if possible without prior training. They also wanted a wider range of functions to keep manual monitoring to a minimum. The team also asked to see the widely distributed, partially virtualized infrastructure of the BAUER Group at a glance and in a comprehensible way.

The IT team of the BAUER Group implemented a PRTG server, which monitors the IT and non-IT components in its own computer center and in around 60 branch offices around the world. The software uses so-called "sensors" for monitoring. These are predefined measuring points that can each monitor one or more parameters of an infrastructure component. The sensors send the information received on the status of systems, devices or applications in real time to the server of the monitoring software, which is located at the helpdesk in Schrobenhausen. There, all monitoring data is clearly displayed on the PRTG web interface. 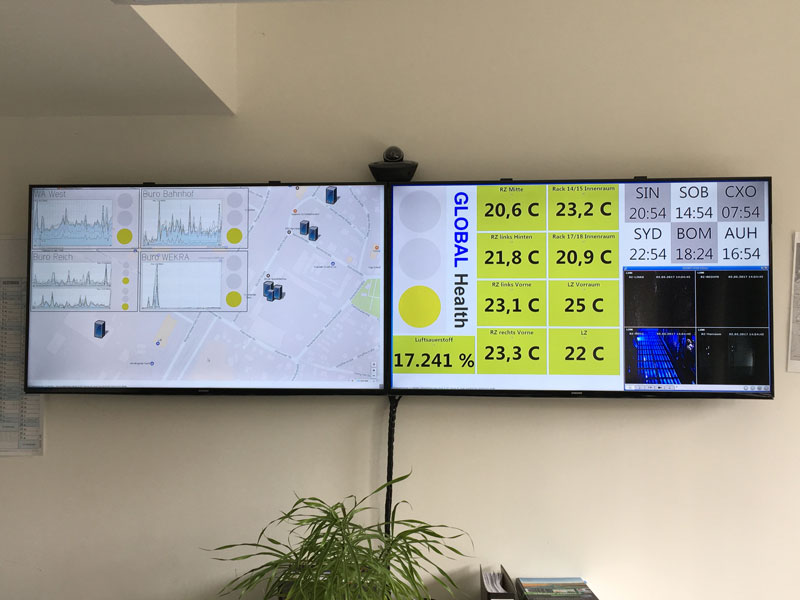 Monitors in the system administration office.

For monitoring the worldwide network, the BAUER Group uses a whole series of predefined PRTG queries, so-called sensors. These include AD replication, DNS, EventLog, Exchange, FileContent, FTP, http, http advanced, ping, SNMP and VMware sensors for virtualized infrastructure areas. With more than 100 VMware hosts, PRTG continuously monitors hardware status and overall performance. In total, the software monitors around 1,000 virtual machines and displays information on their accessibility, CPU load, memory utilization, various services and SSL certificates. In addition, special sensors keep an eye on the security tools of the BAUER infrastructure. They monitor, for example, the availability of firewalls and the throughput on their interfaces. Other sensors provide important information about the availability or battery life of the APC UPS power supplies.

In addition, those responsible at the BAUER Group were convinced by the PRTG functionalities for environmental monitoring: The IT team at the construction and mechanical engineering group is now also able to measure the temperature, oxygen content and energy consumption in its own computer center. "I haven't yet discovered an area in our infrastructure that we can't monitor with PRTG," sums up Tobias Gebauer. "Even if PRTG didn't provide a predefined sensor for specific aspects of our network, we could easily write our own sensors using Power Shell. These self-written sensors could easily be executed with an EXE script sensor and connected to PRTG."

Last but not least, BAUER uses a relatively new PRTG feature: The business process sensors of the software combine several sensors into one process. The BAUER Group uses these sensors in its own computer center to monitor complex IT processes. The business process sensor in the data center, for example, aggregates the status information on temperature, electricity and climate, so that the helpdesk staff can quickly see the overall picture. In this picture, PRTG also depicts interactions and dependencies between individual components, enabling employees to better assess potential risks in the event of outages. The BAUER Group uses the business process sensors not only in the data center, but also to monitor the processes of the internal e-mail system, the SharePoint server and the SAP system.

The Helpdesk team uses remote probes to monitor the availability of the 60 branches it supports. Probes are PRTG services whose task is to collect the monitoring data. They can be installed in branch offices, where they collect data and send it to the central software instance. This enables the BAUER Group to monitor all globally distributed locations uniformly with one license or installation of PRTG.

The remote probes of the software are also worth their weight in gold for the company's larger construction projects. Such projects can last up to three or more years, depending on their scope. In this case, the specialists of the BAUER Group set up mobile racks on site containing UPSs, servers, switches, firewalls and more. The company regards these mobile units at the permanent construction sites as a "new location" and connects them to the central PRTG instance via a remote probe. New mobile racks on the construction sites can be flexibly connected to the monitoring software and reliably monitored by the helpdesk. 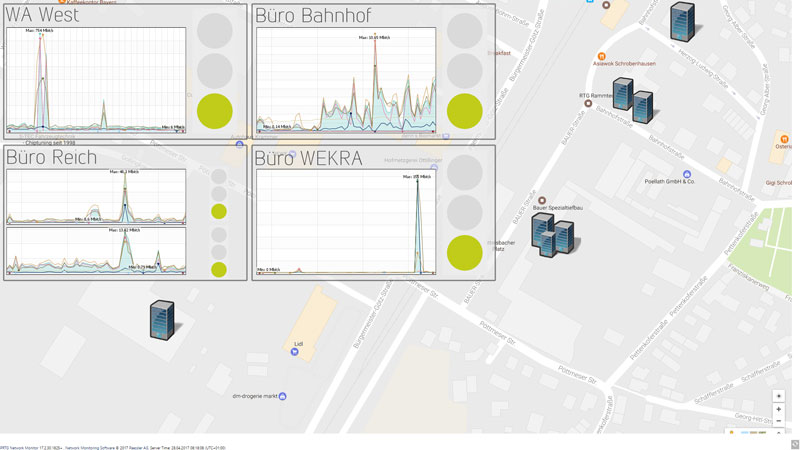 Keep an eye on distributed locations with PRTG

Making sure the lights are always green

All PRTG remote probes and sensors have thresholds that can be individually defined for each component of the infrastructure. If these values are exceeded, the monitoring software immediately sounds an alarm. The warning messages and live data reach the BAUER Group employees in Schrobenhausen. They have configured PRTG in such a way that in the event of problems with the core systems (e.g. in the data center), the alarms are reported via SMS; in the case of less critical systems and applications, it is performed via e-mail. 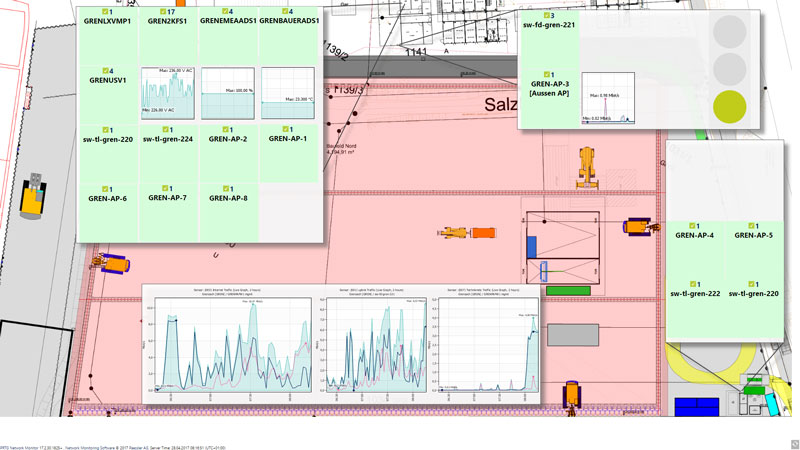 As a result, employees can view the corresponding incidents in the clearly laid out PRTG web interface and directly estimate the extent of a malfunction or defect. They then contact those responsible in the branch offices so that they can initiate countermeasures. "PRTG's individually configurable alarms enable us to react with lightning speed in the event of an emergency. However, we very rarely have to deal with emergencies, because thanks to central monitoring we can identify and eliminate bottlenecks or errors at an early stage – before they become real problems," explains Tobias Gebauer.

For each branch, the BAUER Group also used PRTG to create a dedicated map, i.e. a clear dashboard display with status information on the local infrastructure. The maps of the 60 branches in Schrobenhausen are displayed on two large monitors in the system administration office. "The maps give us a quick overview of whether everything works in the branches," adds Tobias Gebauer. "We have configured each map so that it shows two 'traffic lights': one traffic light shows whether the connection to the branch office is still active; the other shows the status of the servers there. This enables us to identify problems in both areas directly and inform the IT contacts in the branch offices immediately. This transparency makes our daily work much easier."

Since the IT team of the BAUER Group has to monitor a complex infrastructure with only a few people, the use of the PRTG solution with its unified monitoring approach was the right decision in every respect: a central overview plus automatic alerting in the event of an emergency instead of complex individual controls. The IT team can invest the time saved into new projects in the future.